Do you know how much your parents made (or make)? Or how they really spend their money? I don’t.

What about your friends? Even the close ones?

I can think of just one person whose salary I know (my signifiant other), and even then, I don’t know the details of how much he’s saving or spending in various categories or what his big picture looks like.

For MANY of reasons, but here are two.

Because I want to open the dialog, I’m going to share my income and expenses for July and August of this year — what actually happened, what I was happy with and what I’d like to work on.

A little background before we start — I’ve been working as a freelancer for one full year now. I rent an apartment in a low cost of living area. My son lives with me half the time (shared custody and expenses); there is no child support or alimony either way. I have no debt (no mortgage, car payment or student loans).

$2,700 + $190 from savings for dentist appointment. This was a bit low to be comfortable for me, so I increased it in August.

The screenshots included here are from YNAB Classic. YNAB is one of the three amazing resources that helped me get control of my finances.

Next to each category I list the desired monthly budget. When I get paid on the first of the month, I use these numbers as my starting point. The best thing about the budget is that it’s just a guide. As the month progresses, I tweak these numbers — pulling from some categories and pushing to others if needed. In most categories (like groceries), I do a zero-based budget, meaning that I hardly ever leave money left over from month to month; I end up moving the excess (if there is any) elsewhere.

Here is a breakdown of every grouping and category with the desired budget, actual budget and actual amount spent for both July and August. 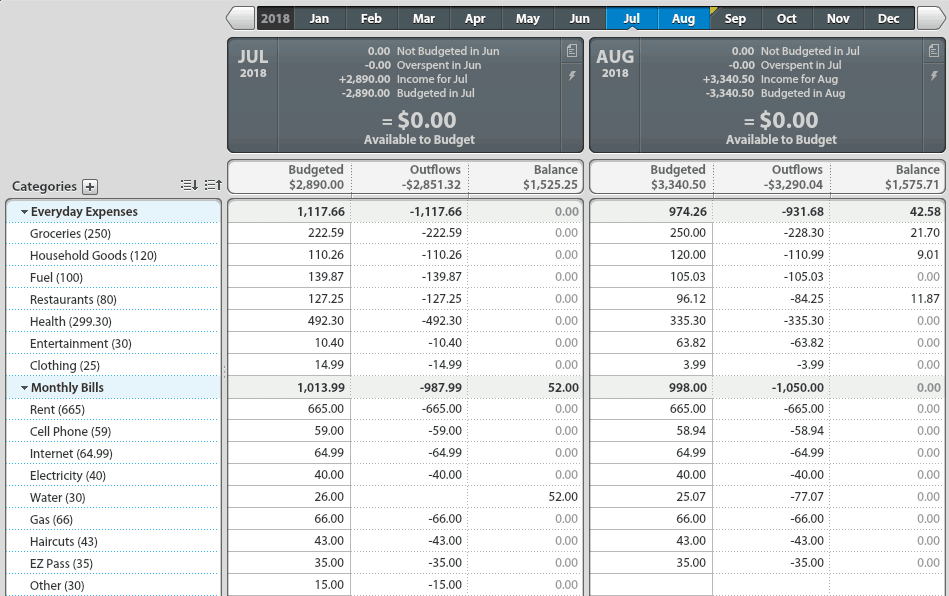 Rainy Day Funds
Car Insurance (57)
Budget – July $57; August $57
Spent – July $57; August $57
It shows “spent” in the insurance categories (even though I pay them annually) because I transfer the money to a separate account each month. This is an extra step, and maybe it would be better to eliminate it for the sake of simplicity. Finances are more easily managed when they’re simple.

Car (100)
Budget – July $0; August $0
Spent – July $1.08; August $65
I have not been contributing to this category like I would like to. I have some funds reserved if something breaks, but currently not enough to replace the car.

Not listed is my SEP IRA because the funds come from my business. This year I set up the SEP and purchased a target date retirement fund (VFIFX) with $1,200 ($100/month). As the business grows, I will contribute more. 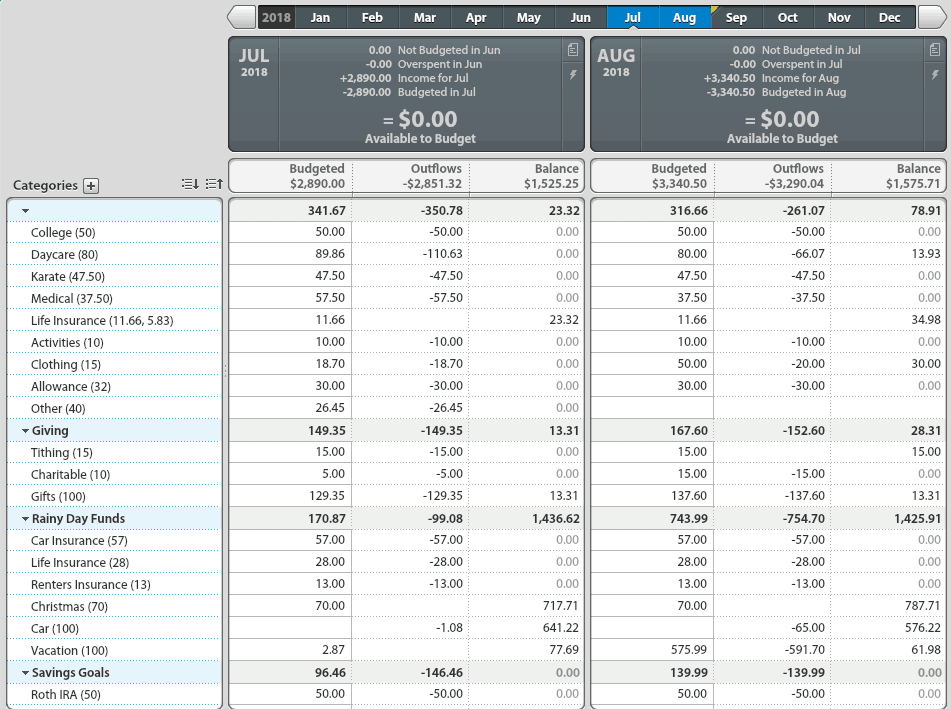 Like anything in life, my finances are ever changing. It’s something I have to keep working on always, but I’ve found that it’s less work now that I have a great system in place. My goal is to be able to take care of myself, sleep at night and be a good role model and teacher for my son.