Six months ago, I published a post on how much interest J had earned since the Bank of Mom opened for business.

Here’s his statement for this month: 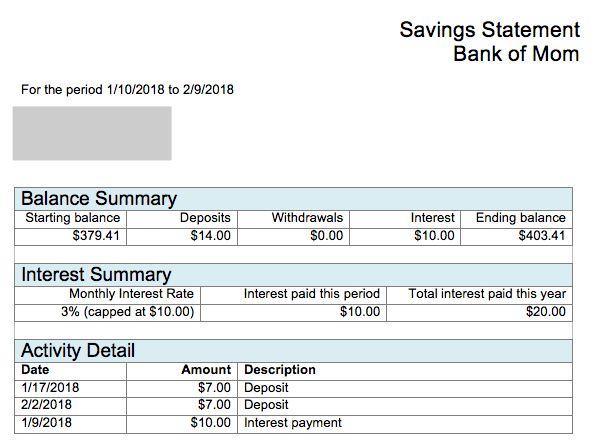 You’ll notice that I’ve capped his monthly interest at $10.00. He also gets $9.00 in allowance every two weeks, and I feel that almost $30/month is a good amount for a 9-year-old each month. It’s enough to give him experience saving and spending while not breaking the bank.

For all you spreadsheet geeks out there, here’s a chart of his account balance and interest over time, as well as the monthly deposits.

Some deposits were lower as he was directing more of his money towards saving for a new Lego set. He made a plan to buy the set while still putting at least 10% towards his savings account. But generally, the deposits were high as at this point, he doesn’t have many wants.

Do you pay your kids interest? Tell me all about it in the comments below!