Several weeks ago, my sister sent J a gift in the mail — the Harry Potter Lego Dimensions Team Pack. J is a HUGE Lego fan, so naturally Legos are a great gift for him.

When he received them, however, he told me that he didn’t have the rest of the parts necessary to use them. Apparently you need a starter pack, and oh, it’s available for PlayStation 4, PlayStation 3, Xbox One, Xbox 360, and Wii U.

Yeah, we don’t have any of those.

I immediately stopped investigating how we could play with this toy, and we started brainstorming on what we could do instead.

J decided to return the gift and get something else. Having no idea how much Lego Dimension Team Packs are worth, we headed to the store and hoped for the best. (Seriously, though, how much could it be? There were like four pieces in this tiny box.)

Imagine our delight when we found out the return value was $25 (!!!). We walked around the store for awhile, trying to find something to get instead. He picked up a few things, but there was nothing that he wanted that he could afford.

So we took a step back. I asked him what he really wanted.

I posed the question, “Why don’t you save the gift card and put it towards the set you really want?”

We’d saved for things before — Christmas presents and some Pokémon cards earlier this year. He was already familiar with the process, but this was a MUCH larger amount and would definitely take longer.

It was difficult for him — you could see his mind churning — struggling with wanting to buy something today vs. getting something that he actually wanted, but later.

I won him over (parenting victory?), and we left the store with nothing.

When we got home, we set out to figure out how long it would take to save the money.

In the first short-term savings plan we did, there was a deadline — Christmas. But in this one, he is only limited by the amount he can save.

He gets an allowance ($9 every two weeks) and after putting at least 10% towards long-term savings, he can safely save $8 towards his new goal.

The other difference was a starting amount. When he saved for Christmas presents, he started with $0. Here, he is starting with $25. 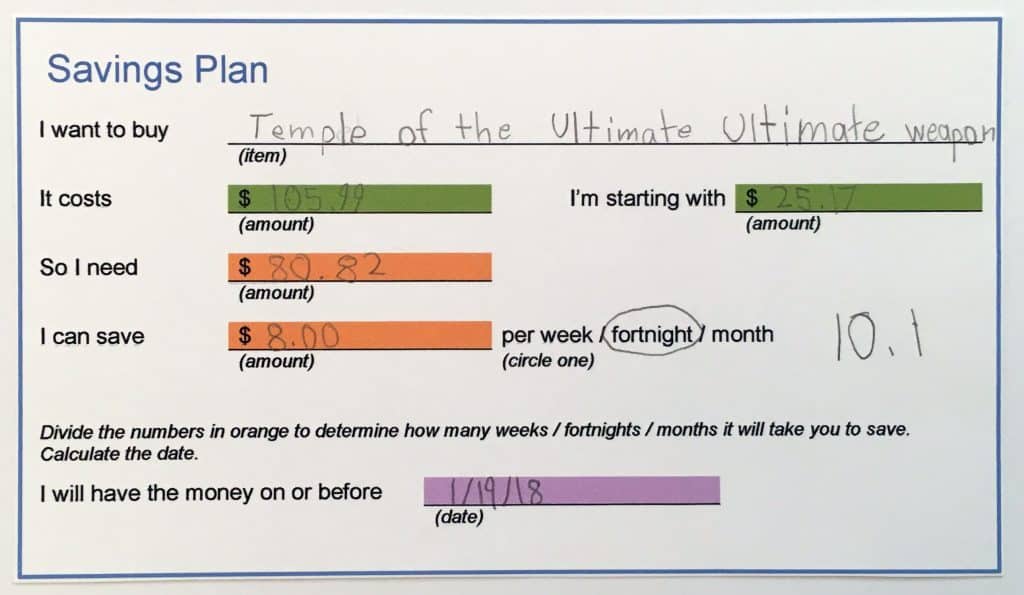 Here’s all of our plans:

And hey, this works for adults, too.

The savings plan hangs on the refrigerator. Writing down your goals is so important, but you also want to put them where you can see them!

A few times he has asked to do extra chores to earn more money. (This from the kid who isn’t motivated by money.)

We’ve also had some great conversations (initiated by him) about how long it took him to save his first $100 (in his long-term savings account) and what would happen if he put extra money towards the goal.

I don’t necessarily care about the money or what he wants to buy, but it makes me feel good that he has identified something that he wants and is actively taking steps to get there. I consider this a good life skill to learn.

When he gets closer, we’ll start looking around for a cheaper price. (If one can be frugal with Legos…) If he finds it elsewhere for less, I’ll give him the cash equivalent of the Target gift card so that he isn’t stuck there. (And I’ll try really hard to find something at Target that I can get. What ever will I pick?)

Some stores also will match prices. If you happen to be at Walmart, but see a cheaper price somewhere online, you can ask the cashier for a price match.

When the time comes, though, I wonder if he’ll actually want to spend that money on the set. Or if maybe that large sum of money might be used for something else (or saved for something even bigger). Only time will tell! Update: Read about J’s purchase!

What about you? What are your kids saving for?

2 replies on “Delayed Gratification For The Win”

My 8 year old son is also a huge fan of anything Lego… especially the huge expensive sets. I’m sure he too would love the Ultimate, Ultimate…whatever. And we also don’t own a gaming system. Great job on getting him to set a goal! I’m sure he will be so proud when he gets there!

The huge, expensive sets really draw them in, don’t they? And thank you!!